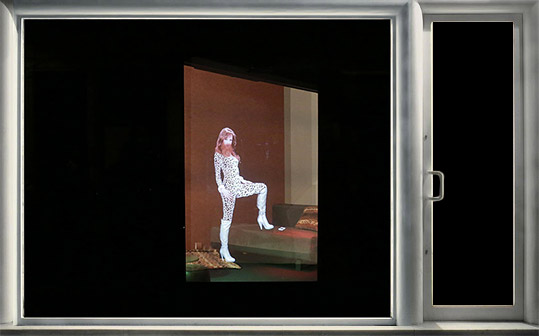 is a multimedia artist, video director and scenographer. His short movies in super 8, realized at the beginning of the 90s, in which he put himself on stage, in absurd and daily situations, made of him, according to certain critics, the leader of the French auto-filming. Having realized, from 1995, numerous optical theaters (works in which the artist appears in the form of hologram, among real and tangible objects), he signs scenographies and directions of shows in the field of the Opera in particular. His scenographies are always based on the direct use of the video.

The work that will be exhibited at Galerie Pièce Unique (4, rue Jacques Callot) is a virtual installation entitled: “Je reviens à 19h” (I’ll be back at 7 pm).

The attention of the passers-by is got by the presence of a woman in a shop window. An attractive woman who wears tempting clothes (a sexy dress which can be or stereotyped enough, in the kind « prostitute » – with more refinement, however, than that of the any girl working the streets- or resolutely more elegant. In which case these clothes will be a recall of the creation in lingerie).

But a « detail » will at once call the attention of the intrigued passer-by: the beautiful woman with harmonious face has a beard. A doubt settles down to guess whether she is a woman or he is a man. It is likely that most of people will think that it is about a transsexual.

The creature, let us say, sits on a small sofa. She talks on the phone or sends texts. Around her are arranged some furniture and elements of decoration which make the space of the gallery a boudoir inciting to languor and pleasure. Everything soaks in a soft and warm light.

Behind the creature, the spectator can see another window, as in face to face of the one by which he looks. That window seems in the same way to overlook an outside space and at least one person, behind the other window, is also observing the creature.

The passer-by who will not dare to observe it for a long time, will walk away with the feeling of having seen a strange prostitute who, in spite of the law, comfortably settled down at the heart of a bourgeois district. He will not miss to share with others his crunchy discovery and doubtless he will be eager to return see the “belle” – so it is true that she or he is particularly charming!-. And can be discreetly he will take a picture with his smart-phone which he will hurry to spread.

The one who will have taken time to observe better the creature, will certainly realize that she is not real. He will understand that he has to deal with a hologram. He will notice the presence of a big mirror, occupying the width of the window, in which some furniture is divided into halves and which also reflects his own image, in the position of voyeur. In this case, to the surprise of seeing the creature, will be added the discovery of the trickery –in French “supercherie”- (The super-darling “super-chérie” is a trickery). In brief, an installation which risks to make tongues wag…

At Galerie Pièce Unique Variations (26, rue Mazarine), will be exhibited a series of optical theaters: On a wet bar of soap (very real and tangible) a Lilliputian executes with great difficulty a risky choreography. This is what we can see in one of the small magic showcases conceived by the artist and which allow, thanks to the already old principle of « Pepper’Ghost « , to make cohabit real objects with « holographic » characters. Most of the time, Sorin interprets himself these playlets, voluntarily naive, in which he expresses, on a comic mode, the human fragility. 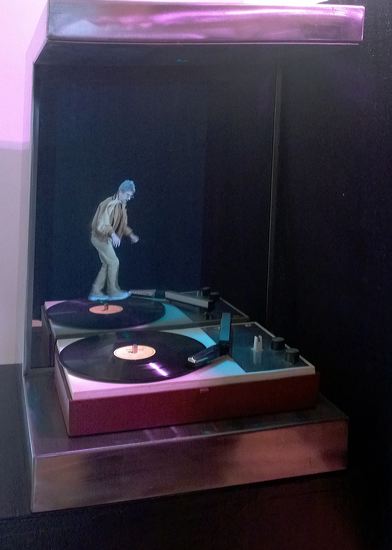 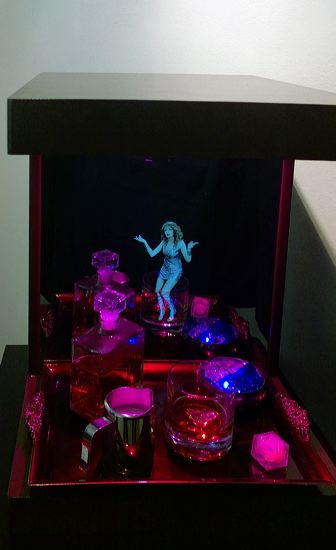 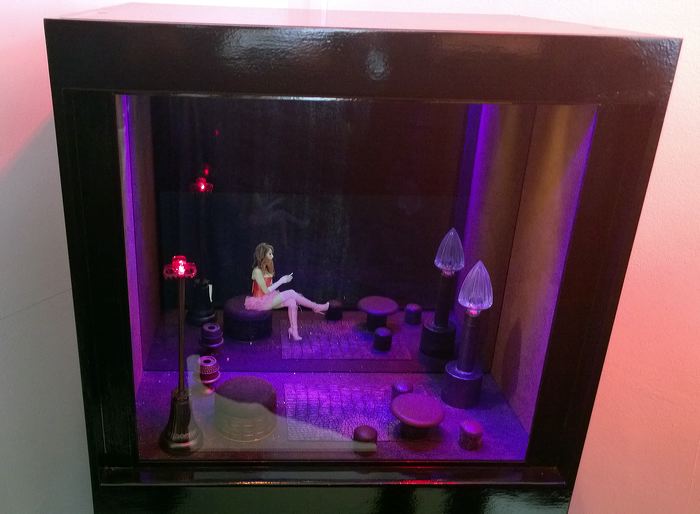 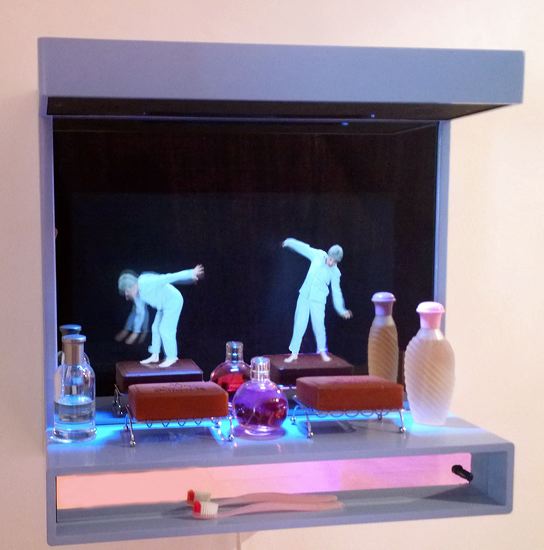 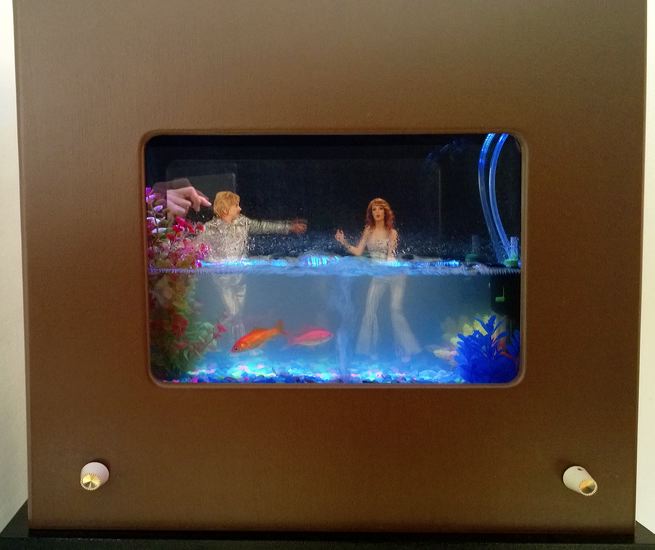 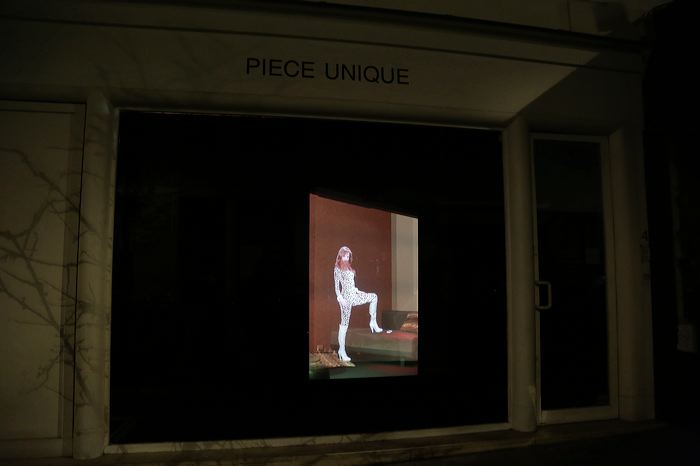 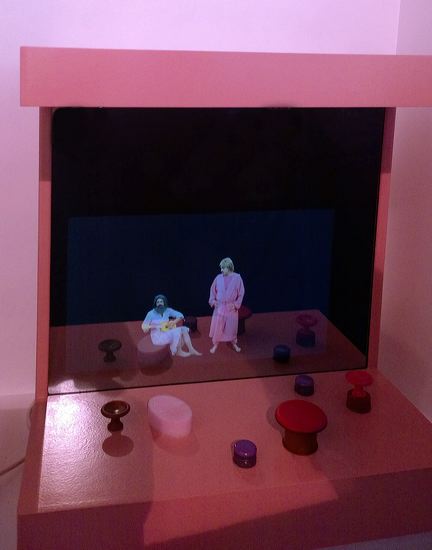 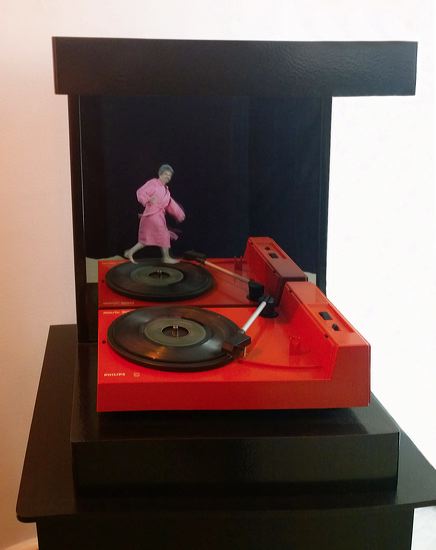 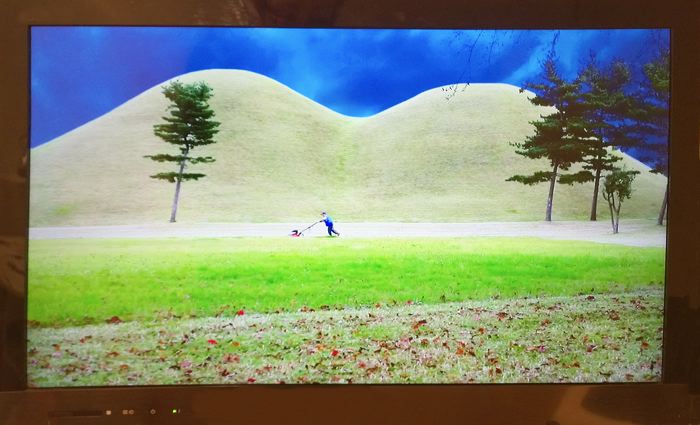