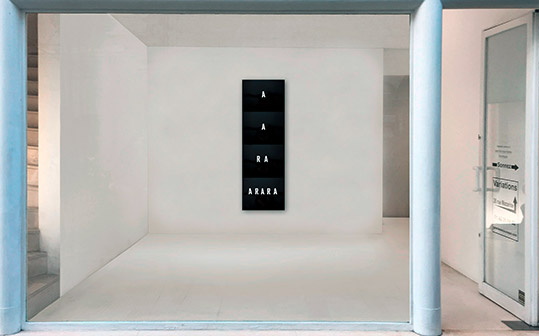 The gallery Pièce Unique in cooperation with the Association André du Colombier, exhibits from June 22nd till September 16th, a work of André du Colombier. This « œuvrette » without title contains the letters of the word ARARA.

There is nothing to say there about this continuation of adhesive white letters on brilliant black paper. Rá rá rá rá is the chorus of a song of Caetano Veloso of 1989, pau de arara, the sadly notorious name of a torture which raged during the military dictatorship in Brazil; it is also how were named the overpopulated trucks which transported illegally workers of the North to the South of the country. The arara and the ará, of the tupi a’rara and ar’ á, are birds with multicolored plumage. Friedrich Parrot reaches the top of the Mount Ararat in 1829, it is on the mountain range of the same name where stopped the Noah’s Ark, and from where flew away the dove.

All or part of these associations, have they something to do with the vertical succession of A and R that a day André du Colombier stuck, more or less skillfully, on four loose sheets? If we had questioned him, he would have refused any comment. Had he lost his temper, or simply repeated in a low voice « ARARA »? The music of Caetano Veloso, he had certainly listened to it.

» Since I know a little better his works, his works with the at the same time abstract and esoteric character, what seems to be a salutary contradiction, I came to think that we – the human beings as well as the decor-, were perceived by this big boy with the curious blond hair, like clues.

Clues, able to enter learned equations, according to linguistic processes which belonged only to him. A pronounced sentence, a word lost in a comment, but by him got immediately, could resound in his mind thanks to light bridges with other words, with a situation instantly perceived physically and mentally.

This captation of scenes, with which the words are at one, could become in the next days, on the monochrome surface of a brilliant paper, a kind of apparently inept assertion, for example: “Varsovie croit en la vodka” (Warsaw believes in vodka). The sentence moreover came with variations, without losing anything of its mysterious wantonness. Other cities called to the rescue were summoned to believe in something. After all, Venice could believe in the Gorgonzola cheese, that did not explain the choice of this monochrome, too brilliant moreover to be situated in the axis of a minimalist esthetics.

How take offence at this leak of the playful ideas, towards spaces traditionally reserved, by a monistic thought, for a unique color, stylisticly worthy? In this field, the first to shoot, Alphonse Allais, has already presented us a sheet of white paper the title of which lights on the yearning of this surface for the invisibility: “Première communion de jeunes filles chlorotiques par un temps de neige” (first communion of chlorotic girls by a snowing weather).

But with André du Colombier, other theoretical or psychological intentions were quickly perceived: it is kind of either/or. It was not the application of a method to make the irony triumph which was at stake in his work, but a need to create a mystery calling its elucidation.
The mystery of the words in their paradoxical relations, the mystery of the location of the words on a surface, the mystery of the thwarted repetition of the words, the mystery of the shifting of the images in a space dominated by a unique color. In fact, a mystery called to break the categories. And that, because of a feeling which had to live in André du Colombier according to which any closed system, too well adapted to the common life, or to a thought much submitted to logic, is generative of slow asphyxiation. What is complicated for us spectators in the proposals which were his, it is to determine the real attitude towards the language. Indifference to classifications? Certainly. Indifference to the meaning? Certainly not. It is enough to look attentively at some of his proposals to anticipate that they are settled according to a relatively strict code.”