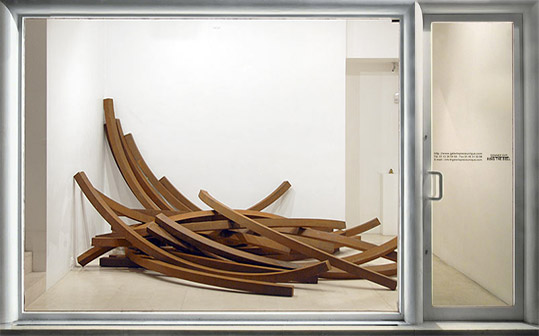 Bernar Venet starts very early reflecting on the artistic creation and multiplies experiments on the shape, the concept and the material. In Nice, He quickly makes friends with Arman and the members of the New Realism who invite him to exhibit with them. In 1966, Bernar Venet settles down in New York, and his works takes a new orientation when confronted with the artists of the Minimal Art. The inclination of Bernar Venet to  » intellectual abstraction  » leads him quite naturally to the Conceptual Art. In 1970, he stops his activity for a while to dedicate himself to theory, he teaches at The Sorbonne and gives conferences throughout the world. It is at the end of the 70s when he applies his rules to his monumental sculptures. His works is then already widely recognized, and he participates in the most prestigious international exhibitions. Rewarded by numerous prizes and honored with several official titles, he is considered among the most important contemporary artists.

The artwork Collapse 24 Arcs which will be shown at the Gallery Pièce Unique is symbolic of the approach of Bernar Venet. The artist proposes once again, the short-lived as possible parameter in a work which will be recreated every time, by insisting on its provisory and temporary nature. He brings in the principle of uncertainty. His aim is, as he already formulated it about works realized before, to free the sculpture from the constraints of the composition and to criticize the utopian principle of an ideal order. These works made of curved lines (connected to geometry) presented on the ground in a disordered –chaotic- way, are, as far as he is concerned, the best examples of a commitment which consists in developing an opened system where we stop seeing things compartmentalized, cut up, with hermetic borders, and where he proposes interrelations.

With a sobriety of means, it is his way to react brutally to the academicism of the square, the cube or the monochrome, this bequeathed inheritance of Malevitch or Mondrian which, according to the artist, « gets out of breath lazily in its nth variation, in its blind faith in an ideal order « .

This installation consists of 24 Corten arcs. These arcs, recurrent in the works of the artist, are presented here as abandoned, intermingled in a chaotic disorder, as after an unforeseen event, the one of a disintegration, of a « collapse ».