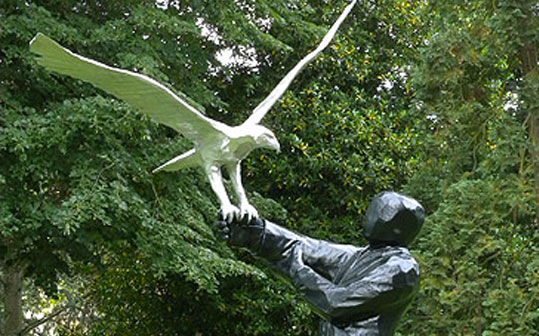 
An introduction to the exhibition

The exhibition is a walk which goes from the botanical garden towards the hall of the Arsenal by way of the cloister of Récollets. The deployment of these sculptures invites us, first of all, to meet with the power of the anchoring on the ground which the human condition imposes us. Then gradually we are invited to a possible overtaking of this condition with by the last more aerial sculptures.

The botanical garden consists of several spaces with different atmospheres. In symbiosis with the spirit of each of them, four great men of resin took place there. The bodies of these impressive characters are solidly pulled over their legs and seem anchored in the ground with all their weight.

These figures are male, though their heads are exempt from lines. The artist’s purpose is the one of Humanity, the Man with a big M.

» If Cyrille André’s sculptures are monumental, they maintain with us a disturbing nearness. Human too human to be the faces(figures) of hero, they are the anonymous effigies of our lives and our close relations.  » Philippe Cyroulnik

At the entrance of the botanical garden, the big strip of grass lined with trees evokes a clearing, a place for a duel staging two characters face to face in an attitude of challenge. This sculpture is called  » L’Un et son Autre” (The one and his other one), it is an allegory to evoke the daily battle of everyone to insure his next day, a battle against himself, his fears, his weaknesses… In the same space, a great man with crossed arms is watching. The authoritarian, stiff and provocative attitude of this sculpture can recall the propaganda sculpture of totalitarian regimes. It is nevertheless here about a friendly figure, named « Guard ». This guardian figure observes us down from its stature like the wise person who watches the preservation of the peace.

A little farther, in border of the pond, the vegetation forms an alcove marrying a great man of white resin on the shoulders of whom are perched three ravens.  » Corvus Corax « , of the Latin name of these big ravens, symbolizes the change of state between the passage of our ground life and that of the hereafter. This sculpture makes the transition between the four figures very anchored in the ground and installed in the first part of the garden and the much more aerial sculptures presented in the rest of the walk.

So in another part of the garden, a character holds at arm’s length a big eagle, as traditionally do the Tibetan hunters. The bird looks for its balance with its wide open wings, it has just settled and plunges his glance into that of the character. The golden eagle is a powerful animal and by his drilling glance he is the master of the sky. The sculpture is called « Les Yeux du Ciel” (The eyes of the sky) .

This eagle is accompanied by 5 congeners perched on masts. This device makes reference to the intrusive security cameras which invade the surface of countries so-called « civilized ».

In the hall of the Arsenal rise « Migrant » and  » Migrant Dog « , these two suspended figures are accompanied by two big wooden dogs,  » dreamy Dog 1 and 2 « , which observe them. This group named “ In transit” was created in coproduction with La Criée, the Contemporary Arts Center of Rennes, for an exhibition in the museum of the Fine arts of Rennes in autumn, 2010. It is about a metaphor of the risk incurred by the candidates to emigration when they take the risk of facing elements as well as the authorities of the aimed countries.

Description of “In transit”:

« Migrant » and  » migrant Dog  » are two figures of black resin suspended under nets filled with white balls. Their bodies are relaxed, neglected, their members hang freely under the influence of the weightlessness. These figures are aware conscious and seem to allow transport confidently. It is about a « migration » without violence. This proposal pays tribute to the migrant peoples who do not hesitate to put their life in danger to reach the aimed countries.

Nets are filled with spheres of polystyrene, materials used for the realization of the soul of the bodies of « Migrant » and  » Migrant Dog « . These spheres are as molecules stemming from the composition of these bodies and maintained in nets. They symbolize the subconscious, the immaterial strength which helps the migrants to face the event of banishment and the installation in a new life.

The attitude of « Migrant » is not without calling back that of the bodies of certain classic paintings, like the Christ in the descent of the cross of Charles Le Brun dated 1680, or  » the interment  » painted by Rembrandt. In these two paintings, the dead Christ is accompanied in his last rest, he gets ready to make his last journey, that of the resurrection of his soul.

In this installation, the reference to the body of the Christ is more symbolic than spiritual. The body of « Migrant » is the one of an average Man, a universal figure in the nude.

Wooden dogs on the ground represent wisdom. They watch the flight of the migrants and impassibly observe them rising.

Their mass anchors them on the ground. A big sweetness, a quiet strength and a certain nostalgia emanate from heir powerful bodies. The scene stage of the taking flight of the character and the dog seems to arise from their dreaming, where from their name:  » dreamy Dogs « .

» Migrant Dog « , accompanies its master in his migration. This association of the dog and the human figure makes reference to a Mexican faith which consisted in sometimes sacrificing the dog at his master’s death so that he helps him cross the nine rivers which separate the land of the living from the kingdom of the dead.

In echo with this walk, two wooden sculptures and aluminum occupy the gardens of the cloister of Récollets.

Evolution 1 and Evolution 2 propose a personal vision of the evolution of the human race by mixing feminine and male morphologies of various periods as well as morphology and attitudes of certain primates.