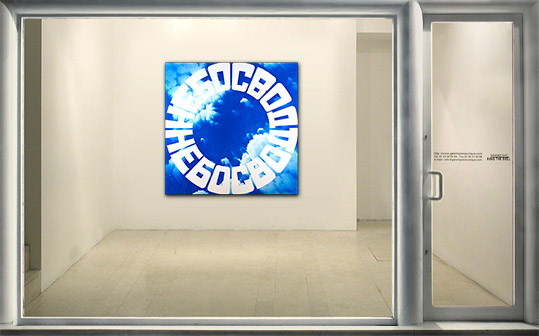 The Vault of Heaven

When Erik Bulatov began studying art in the Soviet Union, during the 1950s, inscriptions and slogans were ubiquitous. Through their aesthetic qualities, they maintained a link with the kind of avant-garde research which had been supplanted by « socialist realism » and excised from art education. At the start of the 1970s, words began appearing in Bulatov’s painting as a way of representing the contradiction between discourse and reality that typified everyday life in the Soviet Union. They explicated, opposed, merged with each other – and endlessly defied each other. Typographical elements now occupy an essential position in Bulatov’s work. He draws on contemporary poetry, and in particular that of Vsevolod Nekrassov, while also maintaining a complex dialogue with the constructivist heritage on the concept of horizons: a political horizon, to begin with, then a social horizon, and now an existential horizon. In 1974, Dina Vierny, who got to know him in Moscow in the 1970s, included him in the first exhibition of non-conformist Russians that she put on at her Paris gallery.

In 1989, Bulatov went to live in New York, and moved to Paris in 1991. It was then that his work, which had first been brought to light in the wake of perestroika, achieved a degree of visibility that it had never previously known. His first major solo exhibition took place at the Centre Pompidou in 1988, after being presented at the Kunsthalle in Zurich. Opportunities to exhibit had been extremely rare up to then. In 1977, it is true, a number of his paintings had been presented at the Venice biennial, but his work was not known in Russia, at that time, other than in the restricted circles of non-official art. Today, it is to be found in major European and American museums, and in private collections.

At the PiEce Unique gallery, Bulatov is showing three paintings in one: the vault of heaven itself, words, and a confrontation between the two. The letters turn the sky into a simple pictorial representation: they abolish the illusion of reality. As regards the sky, it demonstrates the extent to which typography is in fact a pure intellectual construction. Using the techniques of realism to produce an ideal reality, Bulatov invites the spectator to experience the monochrome and the use of perspective in a way that creates a space of freedom.

This exhibition is being organized in association with Olivier Lorquin, director of the Dina Vierny gallery.

At Piece Unique Variations, two drawings by Erik Bulatov will be shown together with works on paper by other artists of the gallery such as Louise Bourgeois, Yayoi Kusama, Mihael Milunovic, Beverly Pepper, Jan Van Oost…