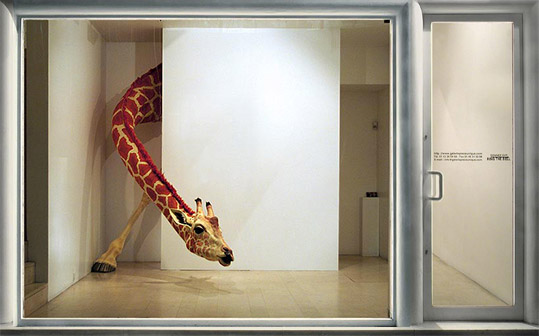 Jean-François Fourtou approaches his work rather as if writing a Bildungsroman, with each new chapter of the initiation taking the form of an exhibition. Both author and character in his own work, he often touches on autobiography while at the same time surpassing it. He offers the heroes of his works a few extraordinary episodes, a few ordeals, and, above all, he speaks to that kind of surprise we feel at watching ourselves develop. In short, everything happens as if we were in a novel of education, woven from countless « once upon a times »: each proposition may at first seem naive, but they soon turn out to be much more disturbing than the first words suggest (but then that’s always the way with stories, isn’t it?).

If childhood is the discreet thread running through most of these works, Fourtou is not out to develop the metaphor of the artist as overgrown child, nor is he trying to entice viewers into some kind of regression. In its use of simplicity and recollection, his work seeks, rather, to perturb our present.

The artist is beginning work on a new volume, one mixing together different genres and media. And the chapter constituted by his forthcoming solo show at Galerie Georges-Philippe & Nathalie Vallois begins, as one would expect, with a « Once upon a time. » Then comes the « giant’s house. » We are like intruders in room where everything is out of proportion. Originally conceived for an exhibition at La Verrière-Hermès in Brussels (end 2003), this ensemble comprising table, chairs and bed creates a little black hole in our adult consciousness. Contrasting scales, incongruities and imbalances, collapsing time-frames – we find here all his work’s recurrent motifs, starting with the child’s cabin, a shelter where we can reexperience forgotten games.

And, to disconnect our adult minds a little more, everything here has been invaded by apes. Following on from sheep, geese, dogs and dromedaries, these incredibly realistic, lifelike sculptures of orang-utans have taken over the gallery space but also a whole series of photographs showing various private or official spaces, the artist’s familiar and favourite places: in Madrid, a bar, a butcher’s shop, a scrap merchant’s; in Paris, the library of the Institut de France, the Ecole des Beaux-Arts, a Haussmann-style flat. Each world seems oblivious to the others, each cohabits with these strange creatures as if they were an integral part of its life, as if a child’s whimsical dream had entered adult life.

Meanwhile, another animal from Jean-François Fourtou’s bestiary, a life-size giraffe, is trying to find its way between the walls of Galerie Pièce Unique.