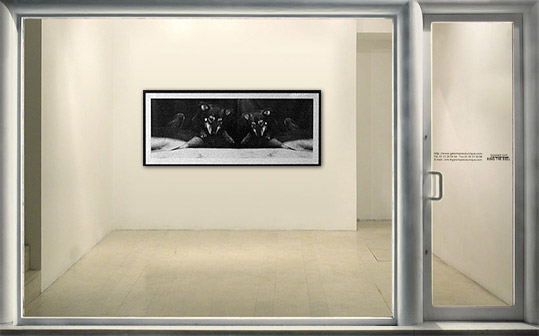 Born in Washington in 1923, lives and works in Hudson, New York.
Richard Artschwager’s works is hard to describe for it escapes to any definition: neither sculpture, nor painting or photography, it lies somewhere between abstraction and representation, both sort of Minimalism and sort of Pop.

It is in the middle of the 60’s that he exhibits for the first time, in New York, furniture that will be later on recognized as his own signature where one is confronted with design objects but without the possibility of using them.
First, there are simple tables, cupboards, mirrors or windows, doors issued from the mass production, anonymous, objects of which he only keeps a very simplified shape: the idea of the object itself.
It is also for Artschwager the discovery of a new medium which will characterize all his production: formica, plastic,chameleon material which invades, starting from the 50’s the everyday life and which the artist transforms to reproduce the different textures of his furniture. They are not anymore real pieces of furniture but “nature-morte” of interiors, abstractions of the everyday life.

From that period also come his first ‘chairs”: this time, formica becomes the support on which Artschwager pastes photographs that reproduce the chair seen from all its sides…
A simple kitchen chair is that way crystallized, like a totem or monument raised against precariousness of life, in a plastic bloc.

The same spirit characterizes his last production: portraits of persons he is close to in the everyday life but whom he freezes in unnatural attitudes. They become therefore sorts of ghosts, shadows of an elsewhere, other dimension of the instant.

It is in this context that Artschwager creates “Immersion” for the gallery Pièce Unique.