1998
Find out more
The game Anne & Patrick Poirier invented for Pièce Unique is apparently identical to the snooker: the table, the balls, the cues and even the lamps respect totally the rules (the only difference is represented by the inscriptions on the cues and the balls of the names of nations in war or which support conflicts).

Precisely in virtue of its verisimilitude, of its « functional capacity », the work allows who watches to not feel stranger to what he is watching but to adhere, almost inconsciously, to the product/work.

However, like in all the beautiful games, the unexpected event exists which contradicts the rule and invest the established order: the complete immobility of everything, the impossiblity to participate, to be at stake. The suspension of all movement transforms th space into a « virtual » space, of stimulation, where it is only possible to observe, reflect and think of hypothetic actions. 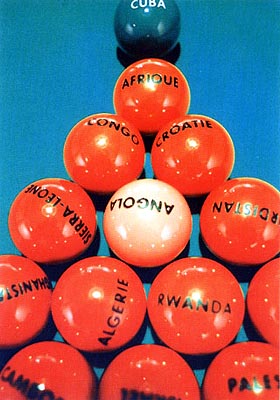