1997
Find out more
Though my assertion has not the immediate character of evidence, I do not believe that it is a paradox to say that Annette Messager’s works belong, firstly, to the territory of performance since it peremptorily requests the presence of the spectator more than the artist.

« La vitrine rouge » (the red window), in the sense of the style, is an accumulation that shifts the point of view pre-established by the space which receives it. From the street we can only foresee the interior, the window is covered with big red curtains – an evidently allusive colour – that are closed each time someone decides to cross the threshold and to become spectator.

That seems to be only a small gap, just a variation of term, however there is a deep diversity between the one who watches and a voyeur.
Regarding what happens behind the curtains and to save the good manners, it’s always better to silence it. 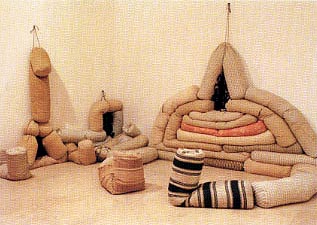