1993
Find out more
No apparent artifice inhabits the installation Bertrand Lavier realized with the space of Pièce Unique: The window – almost completely – covered with glue lets one catch sight of a red cordon like those which are used in the museums to indicate either a separation or an interdiction of access; the search of a signification fights against the significance of the window, the function of which has been cancelled by the artist’s intervention. The only indication is the small limpid hole through which we can have a look or be looked at. It is not however a matter of differnet points of view, the threshold separates – « brings to light » – the identity and the difference of the act of seeing.

« As soon as we see other sighted persons, we stop having just a pupilless eye in front of us, this ghost of ourselves that things evoke pointing out a place between them from which we see them: henceforth, thanks to other eyes, we are fully visible to ourselves. ( Maurice Merleau-Ponty ) 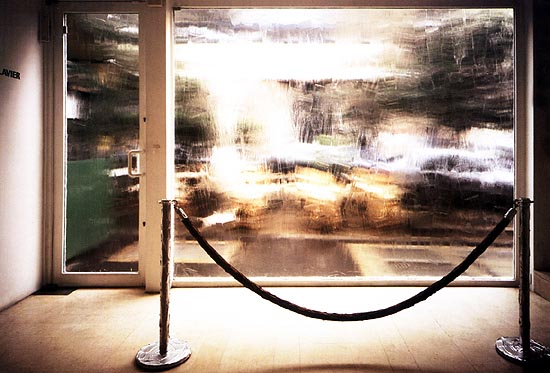