1996
Find out more
Once the social engagement, the ideological roles and the collective utopia have been abandoned, the art of the 80’s has found (or maybe found again) – differing from the cultural well-known nomadism – its own meditative and lateral location, adjacent but yet cut off the evidences of the world. Domenico Bianchi operates in this field. The main element of his work seems to be the construction understood as balance between form and language.

The forms and the figures which are represented in these works are closed to an immediate consummation; the references are things in which the « old » recognition signals as utilization or functionality are canceled in favor of artiscally antique and wise values like transparency, equilibrium, geometry but also in favor of symbolically formative conformations. 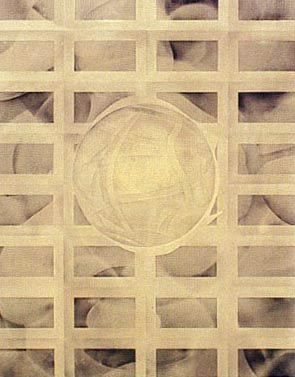