1995
Find out more
God is also a word. A word that becomes frame, that works as limit, weak but still real, unavoidable. God is also an image, eidelon or simulacrum that runs fatally beyond geometrics, in the slip of the plan. The image, Blanchot says, is the tenuous circle that separates us from the indefinite but does not keep us apart from things. The image, then, is, at the same time, the inside, the outside and the threshold which separates them; it is the place of the echo which sends us back the voice and at the same time its dissolution. From there we can imagine God and name Him, not in vain.

« Look at these works for example. They are walls that, at the same time, deny this finction. They make light slip quikly and at the same time are places where shadow protects itself. Constellations in two dimensions ready to sudden downfalls in some points as a matter which enters formal sythmic disturbances, pole of attraction of other bodies, signs designs. » 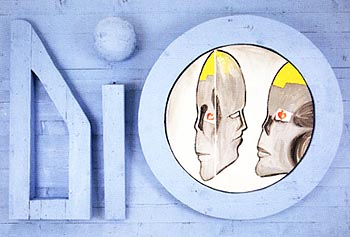