1991
Find out more
The artistic research of Georg Baselitz is characterized by a constant and provocative opposition to the visuel stereotyped models and by an unyielding criticism – activated from inside and then using its own means – of the methods and modes of art.

All his works can be read as an ironic demolition of the limits and of the perceptive models – already there – which conditions the enjoyment of art; Baselitz however shows his own intolerance, mainly towards the presumed duties of Art: « The artist works without justification. His social link is asocial, his only responsibility is his bahaviour, and all this in front of the work. » (Georg Baselitz)

For this reason, his aesthetics of transgression is dominated by a simple language, almost primitive that reverses the point of view of painting and encloses sculpture into the limits – idiomatic – of painting.

Baselitz’s sculptures are – I am not the first to say it – the works of a painter. That is why, maybe, we are surprised in « Frau aus dem Süden » ( woman from the south ) by the lustre in the yellow she is painted with. 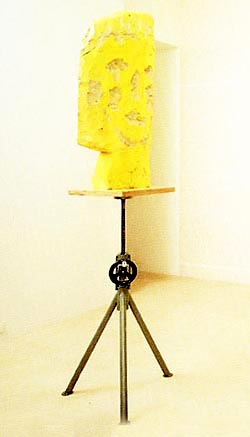