1996
Find out more
The work of Marco Gastini is entitled: « For a possible portrait of Mick Jagger ». However, even an attentive observer – and particularly curious – would toil looking for an even small indication which allows to think of one of the rock music myths.

The difficulties of reading seems to find an immediate solution in the title; in reality, the evident distance which separates the image created by the artist from the words through which he himself names it, deviates afterwards the comprehension.
« For a possible portrait of Mick Jagger… » is mainly a work on imagination, in which the title assumes an almost imperative sense.

Therefore, the artist realizes a displacement of the image from its place of origin (or supposed so because of its weak « visibility ») to the person of the spectator.
In fact, he does not say « Portrait of… » intending the image for the centre of the work, but, « for a possible portrait… » and through such a request, the point of view shifts towards the bility to imaginate. 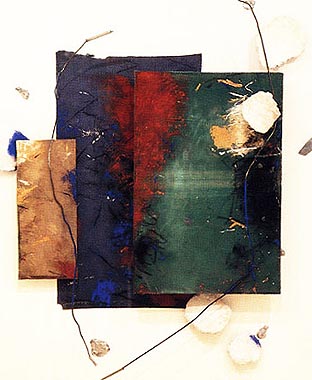