1997
Find out more
In the rhetoric isotopy « CERCLE CARRÉ » is the term used to designate the semantic homogeneity of two elements.

« CERCLE CARRÉ » is since the title, an exemplar isotopy, in which the full and the empty – essential and traditional ingredients of every sculpture – structure themselves at the same level of sense.

The balance between the opposites is reached by using « naturally » – the observation of natural structure – the language of geometry. The semantic figure is an excellent antidote against the discontinuous cut out shape, against the too many fragmentations and the deformations of the living space. By measuring with order, one gets, if not the plenitude at least the concrete character of space, the illusions of being able to control it with be eyes and the hands. Not to be an abstraction or a « pure geographical expression », our space needs to have limits, precise borders. on the contrary, unable to proportion our step, we should probably be condemned to immobility or to ever wander. 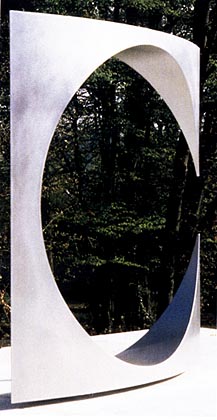