1992
Find out more
Miquel Barcelò belongs to this generation of Spanish artists who, at the beginning of the 80’s, reversed abruptly to domination of abstraction giving a new value to the narration and the figure as fundamental constituents of Painting.

Though it is based on the figure, Barcelò’s works do not aim to be representative; the painting is never exclusively an element of communication but rather an instrument of transmission of this strength/content which, according to Kandinsky, lives in each form.

His art – but it’s better to say his inner glance – does not privilege anything: Barcelò observes the reality and he world; his painting follows Heidegger when he says « being is not but occurs ».
« The occurence of the world means that new events break the continuity of the previous world and found a new one; these inaugural events are events of language. » ( Gianni Vattimo ) 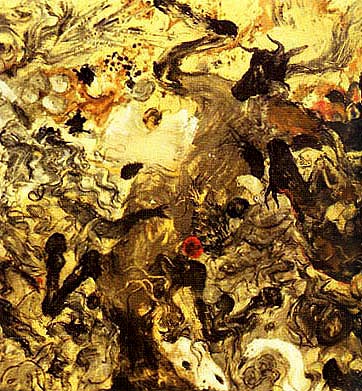