1996
Find out more
Philippe Perrin is a hyperbolic artist. In « Shooting Star », like in all his works, he utilizes the « exagerated » enlargement of an object to put an idea in concrete form beyond the limits of likelihood.

In his installation, Perrin borrows the procedures of the media, using the information as creator of communication; photographies, texts, sculptures objects, – generally meticulous reproductions of weapons used in the urban « guerilla » – once assembled lead to an excess of sense which obliterates the reality.

The large print transports us directly to a kind of unreal place, nearly like in a cartoon, where even the « dramatic » objects – guns, knives, iron fists – lose their common sense becoming semblances or, better, messages which function – in homage to the circular devices of the spectacular communication – seems to be only the function of sending to another message, different in its shape but identical in its contents. 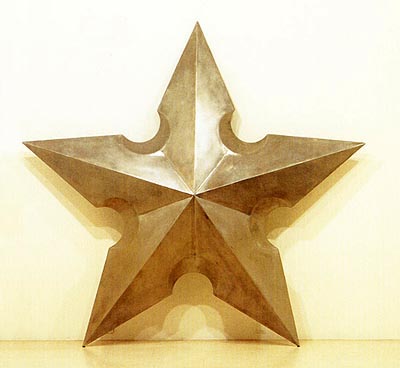