Sol LeWitt developed his first works around 1962, paintings in relief which combined words and geometric forms. His first solo exhibition took place in New York in 1965, the year in which his modular structures appeared. He thence exhibited with representatives of Minimalist Art, notably in the celebrated group show at the Jewish Museum in New York, Primary Structures, in 1966. In his two important texts, Paragraphs on conceptual Art (1967) and Sentences on conceptual Art (1969), LeWitt announced the premise of all his subsequent work: a work of art is the illustration of an idea, and neither material details nor spatial constraints have precedent importance. With this theoretical position, Sol LeWitt migrated from Minimal to Conceptual Art. Due to the predominance of the idea, “the idea becomes the machine with fabricates the art.”

His sculptures become modular structures: constructions which repeat and bring into order a single unity following the principle of geometrical progression. The work inherits LeWitt’s experience as a Minimalist: the forms are themselves placed on the ground in order to call into question the use of pedestals by classical sculpture; they are painted white to eliminate all representational or expressive qualities. Although the material realization of LeWitt’s theoretical models could appear optional or accessory given their geometrical simplification, they can nevertheless not evade their visual translations, and from this point of view they relate well to the “minimal” practice which implies the confrontation with the material work.

For Galerie Piece Unique, Sol LeWitt has created a metal pyramid, founded upon the same principle that all his “structures” (the term used by the artist to define his sculptures). The cube is the basic element; it is put in play in all sorts of combinations from the most simple to the most complex: progression, permutation or inversion, allowing himself to appropriate the notion of rational logic. 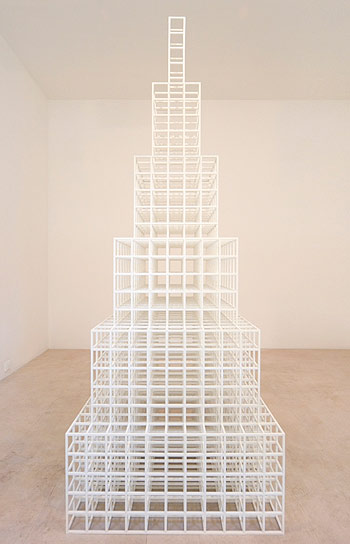 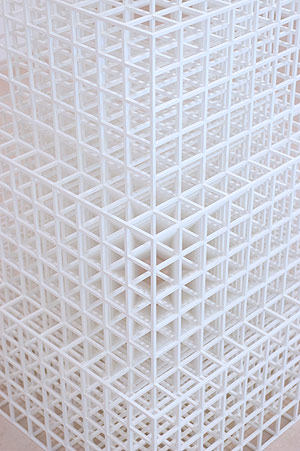 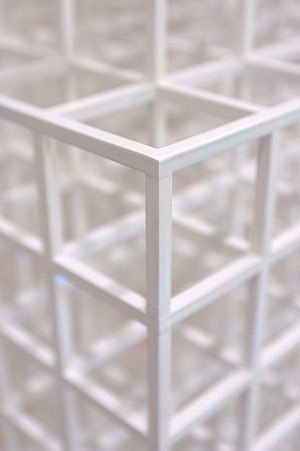