1998
Find out more
Yayoi Kusama is an artist with an intense individuality who always knew how to keep intact her own integrity and her own vitality, often demonstrating, among other things, to have an anticipating vision of the facts of Art.

The extraordinary works shown at the Venice Biennal in 1993 have allowed the general public to meet her talent but they mainly showed the centrality of her research in the international panorama sitting her as an exemplary model and no more as an outlying figure.

For her exhibition at Pièce Unique – the first of Kusama in France since more than 10 years – Kusama will present 2 works of 1997 titled « EXPLOSION IMAGE A » and « EXPLOSION IMAGE B » : two « trees » in golden fabric of great dimensions – where the elements of the composition accumulate till they create an inextricable and « explosive » tangle – which express the persistence of an extraordinary creative tension that can not be limited to the preestablished linguistic sketches.

The works of Kusama carry us to an other world, a parallel world which is not essentially the world of the individual imagination; in accordance with the obsession of the composition, they reveal » a network of the void which cancels the I, the other and all things of this universe « . 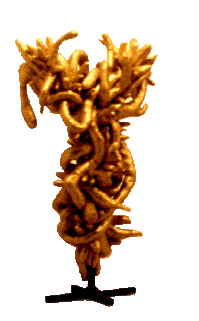 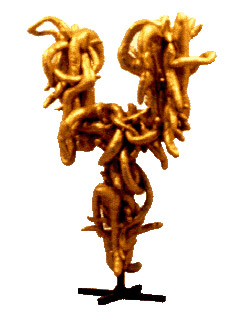