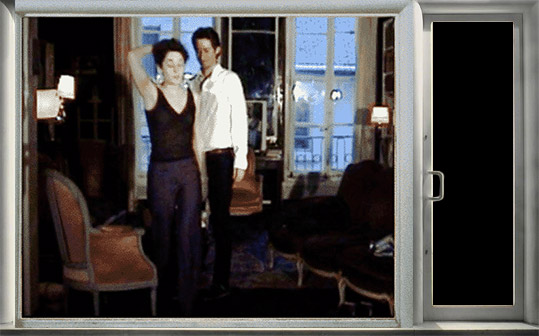 “Inside/out” is a principle of exhibition which plays with the idea of aperture on the city. Gallery Pièce Unique has chosen Pierre Thoretton to allow him invest the internal space of the gallery and extend it to the street. The artist has chosen this place, this context he diverts, transforms, displaces. This intervention “in situ” comes from the desire of the artist to inscribe Video and Installation in the urban space, infiltrate a context, use the existing architectural forms. Pierre Thoretton conceives video projection as a meeting, a dialogue between an image and a space, a luminous phenomenon and a surface. The artist manipulates the notion of screen which marks this boundary between intimacy and the public, a reflection that wanders through the two mechanisms the artist presents. Figure of unveiling and revelation, video installation is characterized for the artist by a movement which comes from the secret universe and projects itself towards the most manifestly visible.
Appearing progressively in penumbra, a moment which is propicious to equivocal perceptions, the images and the environment Pierre Thoretton creates assert themselves in a flirting with dreaming and strangeness.

Outside/Inside/Out
The Gallery is transformed into a Camera Oscura which window is used as a screen. The artist places two projectors which restitute an intimate space where two characters are attending their every day life, come up and down the stairs, talk to each other,undress themselves, etc… Progressively desynchronized, the two images may suddenly split the characters into two, simultaneously present in both spaces, up and down. Those kind of alterations of perception the voyeur knows very well when he spies on his neighbours.

Pierre Thoretton is a video artist, photographer, sculptor and painter. He exhibited recently at ‘Transphère” FRAC Poitou-Charente, at the Marseille artists’studios, at the Kunst Museum of Bonn, at the Cultural Center of Torino and at the Domaine de Kerguehennec. Starting from April 2000 a new exibition at “La Boxe”, Bourges.